Celebrate International Women’s Day by Getting to Know These 5 Women Artists!

If you are wondering why you may have named mostly male artists or are having trouble naming 3 women artists let alone 5, it’s because women artists and their works remain considerably underrepresented in galleries, auction houses, galleries, and museums.

Every March since 2016, the National Museum of Women in the Arts (NMWA) strives to battle gender inequity in the arts with their #5WomenArtists campaign. In honor of International Women’s Day and Women’s History Month, we are joining NMWA and museums across the world in acknowledging and celebrating women in the arts by featuring these 5 Women Artists from The Westmoreland’s permanent collection: Marguerite Thompson Zorach, Rachel McClelland Sutton, Michael Corinne West, Doris Lee, and Janet Fish.

The first woman artist we are recognizing is Marguerite Thompson Zorach (1887-1968), an American painter, weaver, and graphic artist, who was a pioneer in modern art and one of the few artists to embrace Fauvist and Cubist styles between 1910-1920.

Born in 1887 in Fresno, California, Zorach was an exceptional student and one of the few women accepted to Stanford University in 1908. Shortly after being accepted, she left Stanford and spent the next few years studying art in Paris where she began painting in the Fauvist style, met her future husband William Zorach, and made the acquaintances of Pablo Picasso and Gertrude Stein (Bailey). Utilizing the vivid colors of the Fauves with the forms of cubism, Zorach was an early exponent of modernism (Marguerite Zorach Biography).

In 1912, Zorach returned to Fresno and lived with her family in the Sierra Madre. The following year, she married William, moved to New York City and spent summers in New England. During this time, she continued to paint, but also turned her attention to fiber art in the form of the embroidery of tapestries, incorporating both her Fauvist and Cubist concepts in them (Bailey). Due to the art world’s distinction between craft and art, with needlework falling under the former, Zorach’s tapestries were not viewed with artistic merit during her lifetime.

Her brightly colored canvases were exhibited at some of the most groundbreaking early exhibitions of contemporary art, including the International Exhibition of Modern Art (better known as ‘The Armory Show’) in 1913, and she was the only woman included in the 1916 Forum Exhibition of Modern American Painters (Bailey). Unfortunately, Zorach’s work was and still is largely overshadowed by that of her sculptor husband, William, and it’s only recently that her embroideries have received recognition as high art forms with one of her tapestries being featured in the Smithsonian American Art Museum’s upcoming 2022 exhibition Subversive, Skilled, Sublime: Fiber Art by Women.

The second woman artist we are featuring is well-known local Pittsburgh artist Rachel McClelland Sutton (1887-1982) who grew up and lived in the Shadyside area of Pittsburgh. Her father was Dr. James H. McClelland, a founder of Shadyside Hospital, and her mother was of the Bakewell-Pears glass family. Her family home, Sunnyledge, was designed by H.H. Richardson (architect of the courthouse in downtown Pittsburgh) and is listed as a City Designated Historic Structure by the Pittsburgh History and Landmarks Foundation.

Sutton began studying art at a young age at Miss Ward’s School at the site of the Church of Ascension and continued her education at the preparatory division of the Pennsylvania’s College for Women, now known as Chatham College, and the Masters School at Dobbs Ferry. In 1916, she graduated from the Carnegie Institute of Technology with a degree in Fine Arts, and also attended the Art Student’s Leagues in Pittsburgh and New York.

Exhibiting her work in several of the Associated Artists of Pittsburgh shows at the Arts & Crafts Center (now Pittsburgh Center for the Arts), the Carnegie Institute, Bird in the Hand Gallery (Sewickley, Pa.), Post Office Museum, and the Westmoreland Museum of American Art, Sutton became a well-known local artist in the Pittsburgh region.

In 1919, Sutton joined the Associated Artists of Pittsburgh and throughout her 61 years of membership was awarded several prizes for her works of art. During the 1920 through 1940s, she produced portraits, western Pennsylvania landscapes, and views of Pittsburgh; mainly painting with oils using an impressionistic technique. In 1945, Sutton’s focus shifted to modern-style watercolor, and she joined the Watercolor Society, becoming an honorary member in 1974.

Due to her deteriorating eyesight, Sutton stopped painting at the age of 82, but her work was still shown later in 8 local exhibitions. Thirteen years later, Sutton passed away at the age of 95. 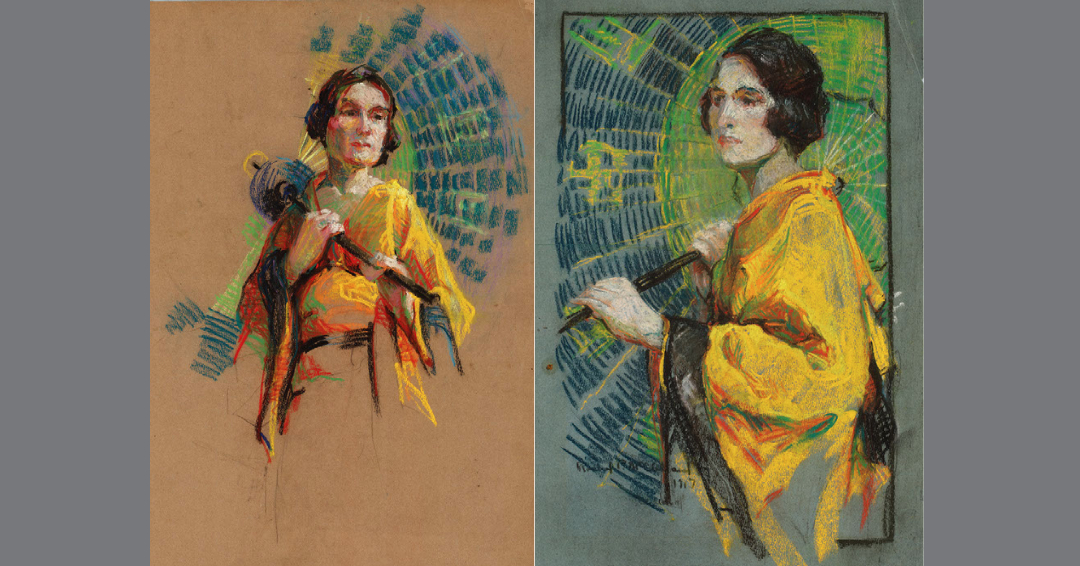 Two of Sutton’s pastel drawings, Butterfly Lady (pictured above right) and Woman in Asian Costume (pictured above left) are currently on view in Pattern Makers at The Westmoreland.

The third woman artist we are highlighting is Doris Lee (1905-1983) who was one of the most recognized artists in the country during the 1930s and 40s and a leading figure in the Woodstock Artist’s Colony. In the American art world from the mid-1930s through the 1950s, Lee was considered among the top female artists, actually among the top figurative artists, regardless of gender.

In 1935, her career was launched when she received the Logan Medal from the Art Institute of Chicago for her painting, Thanksgiving, depicting a busy farm kitchen preparing for the holiday dinner. At one point, postcards Thanksgiving outsold those of Grant Wood’s iconic American Gothic.

Adapting aspects of the regionalist style, folk art, modernism and abstraction, Lee painted realistic subject matter in her own unique painting style, that is simultaneously primitive and modern. She was also a very successful commercial artist, producing fabric and ceramic designs, prints, and award-winning illustrations for books and publications, like Life and Fortune. Despite her achievements and commercial success, Lee’s work was often dismissed due to its folk art style and domestic focus.

During fall 2021, The Westmoreland is proud to be presenting Simple Pleasures: The Art of Doris Lee, the first major critical assessment of Lee’s works. Bringing together paintings, drawings, prints and ephemera spanning her forty-year career, Simple Pleasures gives overdue recognition of Lee’s significant contributions to American art. To find out more about the upcoming exhibition Simple Pleasures, click here.

The fourth woman artist we are shedding light on is Michael Corinne West (1908–1991). Born Corinne Michelle West in 1908, she studied music and art as a teen in Cincinnati, Ohio and in the 1930s moved to New York, where she briefly studied painting with artist Hans Hofmann, who is credited with helping shape the Abstract Expressionism movement.

During the 1930s and ‘40s, West painted in a Cubist style before shifting to more Abstract Expressionist works. During the late 1930s, she changed her name to Michael in an effort to be taken more seriously as an artist in the male-dominated art world. Critics often remember West for her personal relationship with artist Arshile Gorky despite her being an active participant in the art world (Michael Corinne West Biography).

West did exhibit alongside Mark Rothko and Milton Avery in a 1945 group show at Pinacotheca Gallery, and participated in a 1952 show at the Stable Gallery that included Willem de Kooning, Philip Guston, and Franz Kline. She had her first solo exhibition at the Uptown Gallery in 1957, which featured 40 of her oil paintings (Chernick).

“Though West strove strenuously to break through into wider recognition with some of the most arresting and uncompromising drawings and paintings of the post-war years, she was never dealt a full hand at the big boys’ table of influence or acclaim.” – Kelly Grovier, Blinding Light: The ‘Great American Painting’?,(BBC Culture, 2020).

Over time, West faded into obscurity and was largely left out of 20thcentury art history. She died in New York in 1991, leaving behind her estate which included paintings and archive.

In 2019, New York-based Gallery Hollis Taggert took over West’s estate and featured a selection of her paintings and drawings in the solo exhibition Space Poetry: The Action Paintings of Michael West, seeking to rectify the omission of her practice from Abstract Expression.

The Westmoreland was fortunate to acquire one of West’s works, Red Squares, as a legacy gift in 2018, and this painting is currently on view in the Mezzanine area.

Born in Boston in 1938 to a family of artists, Fish spent her childhood at the Old Lyme Colony in Connectictut and Bermuda. Her grandfather was impressionist Clark Voorhees; her mother a sculptor, which Fish originally wanted to be; and her sister, Alida, a photographer.

Fish studied sculpture and printmaking at Smith College, and after graduating went on to obtain an MFA from Yale University. During the late 1960s and early 1970s, Fish created her first paintings, depicting glass objects and transparent containers filled with liquids and fruits covered in cellophane, with particular focus on the effects of color, light, shadow, and reflection. In her paintings she has also been known to depict brand names such as Windex or Lay’s Potato Chips, aligning her with Pop art contemporaries.

In 1978, Fish began spending half the year in New York and the other half in Vermont. This move coincided with her merging still life, human figures and landscapes into increasingly complex scenes skillfully animated with color, light and shadow. (Janet Fish: Pinwheels and Poppies, Paintings 1980 – 2008)

With her impressive, prolific body of work exploring whimsical combinations of objects in changing light, Fish has also been credited by the DC Moore Gallery with revitalizing the traditional body of still life (Janet Fish: Glass & Plastic, The Early Years, 1968-1978).

Currently on view in Pattern Makers at The Westmoreland is Fish’s lithograph Wise Guy, depicting lollipops, conversation hearts, and Swedish Fish candies, perhaps a humorous reference to her name, around a pressed glass bowl.