Celebrating Contemporary Black Artists in Our Collection: 3 Artists You Should Know

Throughout history, artists of color have been excluded from academic associations and teaching institutions and have not been fully recognized for their talents, achievements, and contributions to the art world. Currently, Black and marginalized artists are still less likely to have leadership positions in arts organizations, less likely to receive grant funding, and less likely to have their art acquired by private collectors and museums.

The Westmoreland has committed to acquiring more works of art by under recognized artists into our permanent collection and in the past year has acquired three works by three contemporary Black artists: Sharif Bey, Tina Williams Brewer, and Stephen Towns.

Ceramicist and professor Sharif Bey (b. 1974) creates both sculptural and functional pieces of pottery, using a variety of forms and textures. His body of work reflects his interest in the visual heritage of Africa and Oceania, as well as contemporary African American culture. 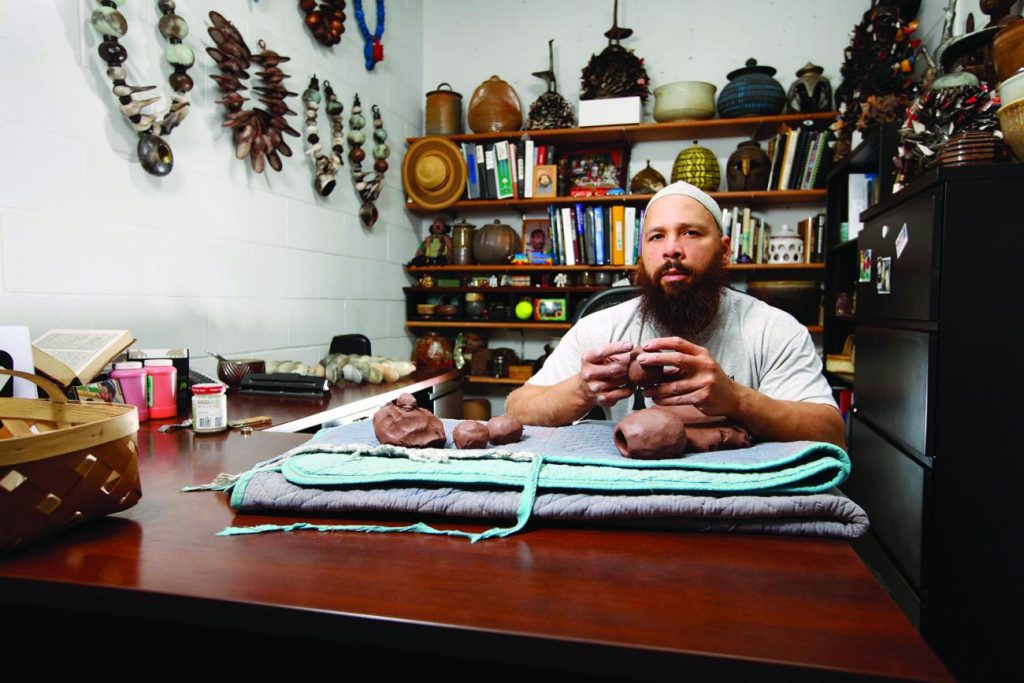 The last accessioned object in 2020 and the newest object added to the Museum’s permanent collection is Bey’s Bird Skull: Fire #2. Through Bird Skull: Fire #2 and his other large-scale bead pieces, Bey explores the cultural significance of ornamentation, adornment, and power. The beads in these pieces are inspired by objects in the natural world, such as bird skulls, raptor claws, and tusks, and Bey refers to these series of forms as Adornment.

To create these pieces, Bey pre-fires the ceramic forms in a kiln, removes them and sets them in a wood fire to achieve their smoky patina, then seals that patina onto the pieces. He often manipulates them to create different textures, making personal choices for presentation so that each resulting piece is unique. They are reminiscent of necklaces, although too large to be practically worn, and harken back to beads as both adornment and as currency in Africa and Oceania. 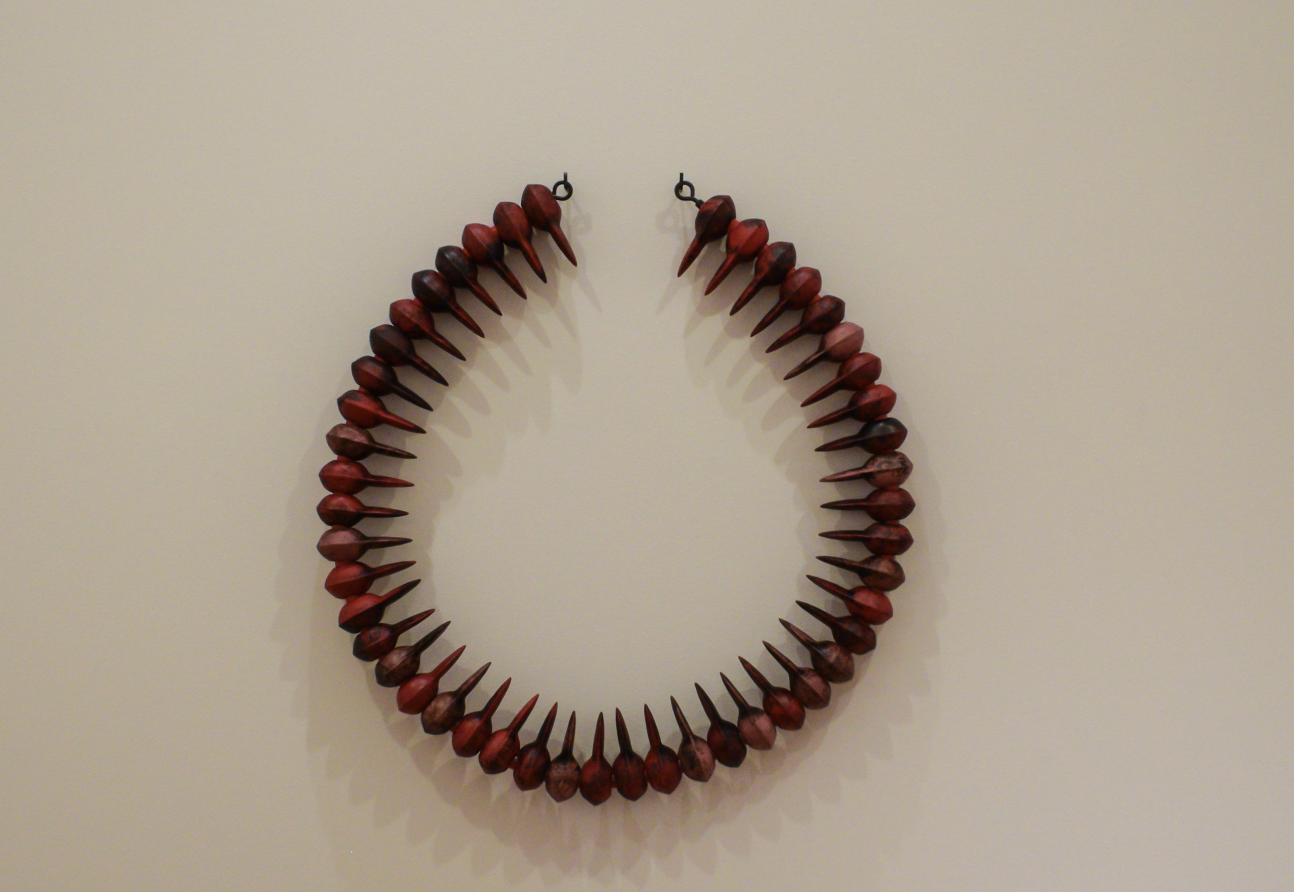 Growing up in Pittsburgh, Sharif participated, as a high school student, in the Manchester Craftsmen’s Guild apprenticeship program where he was introduced to ceramics, a formative experience that inspired his career. He earned a BFA in ceramics from Slippery Rock University in Pennsylvania, an MFA in studio art from the University of North Carolina at Greensboro, and a PhD in art education from the Pennsylvania State University, during which time he received a Fulbright scholarship. He has taught at Winston-Salem State University in North Carolina, Manchester Craftsman’s Guild, and Virginia Commonwealth University, and is currently a dual associate professor in the College of Visual and Performing Arts and School of Education at Syracuse University.

Bey’s work has appeared in solo and group exhibitions, including Sharif Bey: Lived History and Cultural Memory (2017) at Baltimore Clayworks and Sharif Bey: intuitions, fault lines and musings at Concept Art Gallery, Pittsburgh. He has held residencies at the McColl Center for Visual Arts in North Carolina, the John Michael Kohler Arts Center in Wisconsin, and most recently the Pittsburgh Glass Center, which culminated in the exhibition Sharif Bey: Dialogues in Clay and Glass (2018). His work is featured in numerous public collections including: The Smithsonian American Art Museum in Washington D.C., Carnegie Museum of Art in Pittsburgh, Hickory Museum of Art in North Carolina, the United States Embassies in the Sudan and Uganda, and now at The Westmoreland Museum of Art in Greensburg. Bey’s work will be featured next in an upcoming solo exhibition entitled Excavations opening this spring at the Carnegie Museum of Art.

Bey’s Bird Skull: Fire #2 will be featured in our Surface-Texture-Materials exhibition in the Post 1950s Gallery beginning February 7.

The Museum was fortunate to add Brewer’s hand-pieced and hand-quilted Divine Plan to the permanent collection in 2020 through a gift of the Westmoreland Society. The initial layer or background is all strip-pieced, following the traditional way of weaving Kente cloth together. The multiple layers of fabric are hand-dyed and hand-printed batik, and the printed fabrics are from domestic sources and Ghana to which Brewer has either discharged or added color. Using both traditional quilting patterns, as seen in the patchwork squares at lower right and in the petals of the flowers, and incorporating her own original designs, Brewer creates nuanced complex, layered compositions, rich with symbolism.

Divine Plan is a story quilt referencing Mother Nature and the celestial world, and is the synthesis of three forces: the spiritual, physical and emotional. The composition is infused with coded symbolism throughout that viewers can ‘read.’ Surrounded by organic yellow shapes that represent seed pods ‘seeding’ the world and flowers growing throughout, Mother Nature is at the top and very center of the quilt. The blackbirds represent the circle of life as they start their metaphorical journey in the light, descend into darkness, and emerge once again in the light.

Born in 1949 in Huntington, West Virginia, Brewer currently lives and works in Pittsburgh, Pennsylvania. Graduating from Columbus College of Art and Design with a Bachelor of Arts, Brewer has been creating art for more than forty years. Brewer is an active exhibiting artist both locally and internationally, including exhibitions at the United States Embassy in Ghana and the American Craft Museum in New York. In 2013, she was named a Pittsburgh Master Visual Artist and has been recognized by the American Arts in Embassy Program for more than 20 years. Most recently, her work was featured in Three Artists (Three Women), a spotlight exhibition of women artists at the Frick Fine Arts Gallery in Pittsburgh. In 2018, she was the recipient of the Pennsylvania Governor’s Awards for the Arts, and in the same year she was designated Artist of the Year by the Pittsburgh Center for the Arts.

Brewer is also a teaching artist and dedicated resident artist for the Pittsburgh Center for Arts & Media Artist Residency Program in partnership with the Pennsylvania Council on the Arts. Brewer works predominantly with students in schools throughout Pittsburgh and takes great pride in mentoring young people, empowering them to communicate about their life and culture through the arts.

The Westmoreland recently acquired Towns’ mixed media work The Pioneer from his Coal Miner series, a new body of six paintings created for his forthcoming 2022 exhibition Stephen Towns: Declaration and Resistance at The Westmoreland.

Towns’ coal miner paintings are based on images sourced from the West Virginia Archives and History of Black coal miners who worked for the West Virginia Department of Mines and were assigned to the hardest, worst-paying, most dangerous and insecure jobs.  Towns’ series highlights the overlooked stories of these miners’ determination to unionize for safer working conditions and equal pay, ultimately seeking an ‘industrial democracy’ where miners share responsibilities and authority, and make decisions that affect their wellbeing on the job.

In The Pioneer, Towns combines collaged elements with freehand charcoal marks to create a powerful portrait of a Black coal miner standing in a mine. Three yellow canaries, which were used in coal mines to detect the presence of carbon monoxide, flit around the miner and signify the extreme dangers of this job. An American flag, designating this is an American enterprise, hangs in the background. Mica flakes embedded in the paint underscore the darkness underground and the sparkle of the coal found there. Standing proud, you see in this miner’s facial expression both the dignity of the man and the toll that his job has taken on him.

“All of my work is rooted in my growing up in the Deep South. My work is in direct response to issues permeating African American culture, issues such as loss of ancestral roots, slavery, class, education, skin tone and religion. I want to create beauty from the hardships in life.”–Stephen Towns

Born in 1980 in Lincolnville, South Carolina, Towns now lives and works in Baltimore. He trained as a painter with a BFA in studio art from the University of South Carolina, and has also developed a rigorous, self-taught quilting practice. In 2018, The Baltimore Museum of Art presented his first museum exhibition, Stephen Towns: Rumination and a Reckoning. His work has been exhibited locally and nationally, including solo exhibitions at Goucher College and Galerie Myrtis, as well as group exhibitions at Arlington Art Center, Montpelier Arts Center, and Star-Spangled Banner Flag House and Museum.