As a way to help facilitate open dialogue on our social media channels, we will continue to feature artworks in our current exhibitions and collection that directly invite us to reflect, confront, and examine our nation’s history of racial inequities.

“I make art that ain’t speaking against nobody or for nobody either. Sometimes it be about what is wrong in life.” —Thornton Dial Sr.

Dial was a self-taught artist whose mixed media assemblages and sculptures, using castoff or found materials, challenged the boundaries of mainstream contemporary art. Colorful, multidimensional, and highly expressive, Dial’s paintings refer to key moments in African American history and offer a political critique about class and race that remain just as relevant today. (1)

He created Top of the Line (Steel) in response to the Los Angeles riots of 1992, after a jury acquitted four white policemen in the beating of unarmed black motorist Rodney King. The verdict ignited looting and rioting that lasted several days, and the Los Angeles riots in 1992 were among the largest civil disturbances in American history. 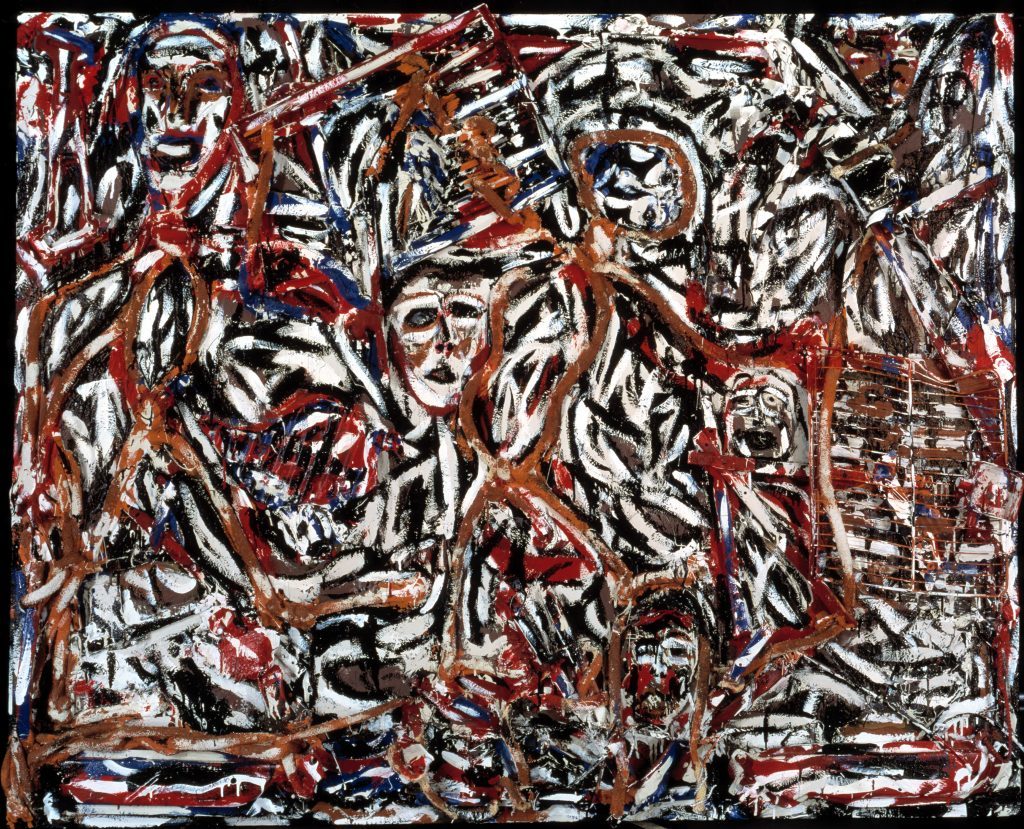 Top of the Line (Steel) re-creates the chaos of the riots with brown rope-outlined figures intertwined in a dense field of color and line, grasping at pieces of automobiles and air-conditioners. Bold touches of red suggest violence; black-and-white figures symbolize racial tensions; red, white, and blue strokes, faint notes of patriotism, interweave the canvas in clusters. (2)

The work’s title Top of the Line (Steel) has a few interpretations. The phrase is usually used in reference to high-quality goods, but Dial, juxtaposing it with his vivid assemblage, implies the socioeconomic struggle for equality. By including the word “steel,” Dial could refer to his own experience working in a factory shaping steel, but the word “steel’ also suggests the homonym “steal,’ which is another link to the looting that took place during the LA riots. (3)

By encoding and placing these objects in latticed, intertwined layers, Dial makes a graver political critique that industrial labor, consumerism, rioting, and race relations were inexorably linked, and they still are today.

Born in rural Alabama, Dial was the second of twelve children and the son and grandson of sharecroppers. He worked as a bricklayer, welder, house painter, and carpenter. For 30 years, he worked at the railway carmaker Pullman Standard Company, where he learned drawing and metal fabrication, skills he would later use to create his assemblages and sculptures.(4)