Pittsburgher, poet, adjunct professor and editor, Fred Shaw is the next writer whose poem is being featured on artist Janet Zweig’s Analog Scroll as part of the Museum’s ongoing Bridging the Gap public art project. Located on the North Main Street Bridge in downtown Greensburg, Zweig’s work displays text by utilizing three-dimensional metal letters held by tracks fastened to the concrete walls of the bridge.

The title of Shaw’s featured poem is Fulcrum, which according to Webster’s New World College Dictionary means “to the support or point of support on which a lever turns in raising or moving something.”

“‘Fulcrum’” was a word I always liked the sound of and to think that our world being made up of so many basic tools that can be turned into metaphors for bigger things struck me just right,” said Shaw.

Usually a poem is read in one sitting, but Shaw’s poem will be revealed sequentially over the period of a year from June 2021-June 2022, which may affect an individual’s reading or interpretation of the poem.

“Writing in couplets allowed for the compression that I think will work on a revealing monthly basis and I hope will be a fun way to experience the poem and give people something to consider as they roll or walk past,” notes Shaw.

The first stanza of Shaw’s poem was installed on Zweig’s Analog Scroll on June 15 and is:

New stanzas of Shaw’s commissioned poem will be installed on Analog Scroll on a monthly basis by Museum staff and volunteers. Once fully disclosed, the entire poem will appear on the Museum’s website and can be read by clicking here.

Although Shaw became interested in being featured in the Bridging the Gap Public Art Project after his friend, landscape painter Thomas Pacquette, reached out to him about the opportunity and application deadline, he has always found the idea of public poetry “to be pretty cool.”

“I’ve always loved well-done graffiti and having had my poem Scraping Away selected for the PA Public Poetry Project in 2017 made me consider the poem to be something more than just happening on a book page,” comments Shaw.

By day, Shaw teaches writing and literature at Point Park University and Carlow University, reviews books for Pittsburgh City Paper, and serves as poetry editor for Pittsburgh Quarterly. By night, he is a published poet with his poems being featured in 5AM, Poet Lore, Briar Cliff Review, Permafrost, SLAB, Spry Literary Magazine, Floodwall, Nerve Cowboy, Mason’s Road, Shaking Like A Mountain, Pittsburgh City Paper, and Pittsburgh Post-Gazette, and an accomplished author of the chapbook, Argot, published by Finishing Line Press. 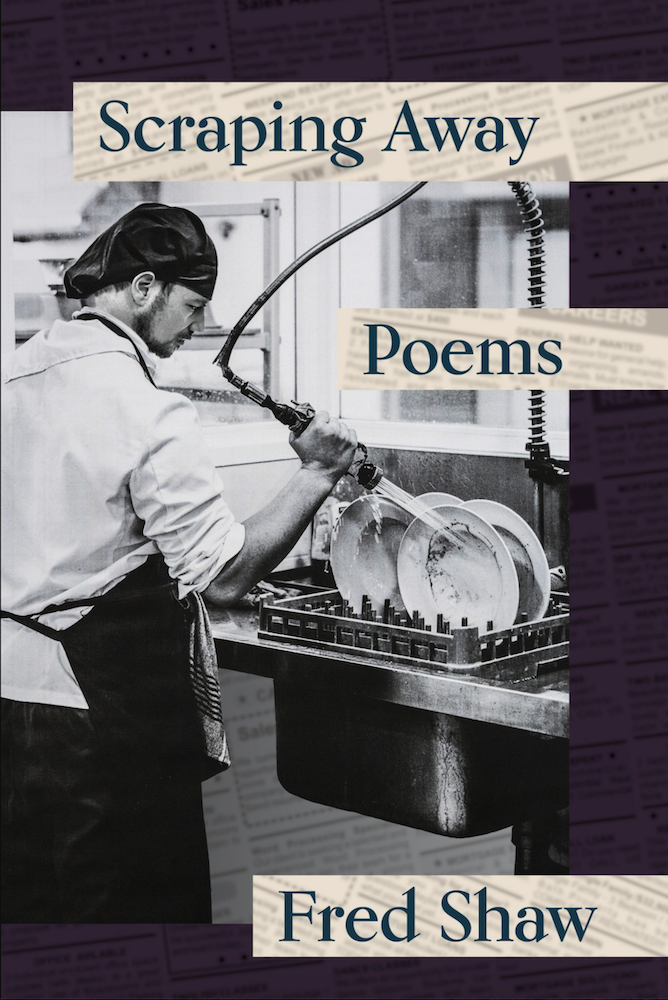 “I found myself focusing on poems about my life in the service industry and trying to portray aspects of that life that goes unseen by those who haven’t done that type of service work,” said Shaw. “Restaurants are full of interesting imagery and people/ co-workers and I found it interesting to try to bring those moments to life. There’s also a focus on family and music, as those seem to be the topics my poems mostly revolve.”

Although Shaw mentions that most of his poems revolve around family and music, the poem he wrote for the Analog Scroll is a little bit different:

“It’s definitely not as confessional but allowed me to think of the language in a less personal but more active way that I wouldn’t have tried with a speaker like myself. I want to create an experience that points out what we don’t notice in that location, what it is and isn’t.”

All of the original site-specific commissioned poems for the Bridging the Gap project are required to relate to one of three themes: the specific site or southwestern Pennsylvania; the concept of bridges or bridging; or the idea of literally bridging the gap between downtown Greensburg, the Museum, and neighborhoods or metaphorically between classes, neighborhoods, or communities.

“I think mostly I was thinking of giving the bridge a voice, one that’s knowing but not often asked too much, and is taken for granted,” Shaw explains. “It’s not a grand span but would make life for commuters difficult if it wasn’t in working order. It also had me thinking about perspective and different ways of creating imagery.”

Shaw hints at what his poem relates to, but curious readers will have to wait to until the entire poem is revealed to see if they agree! The next stanza of Shaw’s poem Fulcrum will be installed mid-July 2021.

Shaw is a graduate of the University of Pittsburgh and Carlow University, where he received his MFA. He has also worked in the service industry for the past twenty-five years.

1. What sparked your initial love of writing or of poetry?
Lots of reading as a young adult had me fascinated with language and story. Song lyrics, especially The Doors, interested me from childhood. Having older sisters with good musical taste was useful in that case.

2. Can you describe your writing process to us?
I usually start with an image, or sometimes a phrase that helps propel the poem forward and grounds it in the tangible.  Then lots of adding, then deletion, moving lines about the page to get it to line-up the way I think it sounds right in my head. I’m a bit jealous of prolific writers as I feel it takes me forever to find completion in a poem.  Some arrive more fully-formed than others and feel like a blessing.

3. Who are some of your favorite authors/poets and why are they your favorites?
Phillip Levine was an important discovery for me, as writing about the working-life hadn’t occurred to me as a subject. Working with Robert Gibb and Jan Beatty as a student gave me needed perspective on imagery and voice that’s evident in their poetry. I find myself enjoying short-fiction and creative nonfiction as narrative and personal subject matter are important to the aesthetic I’m searching for.